Just two weeks before the album Tell No Tales was to be sent to print in 1987, TNT’s Ronni Le Tekrø and Morten «Diesel» Dahl were at the disco. There they heard a drum beat that made them go back to Nidaros Studio in Trondheim, and combined the rhythm with a guitar riff they had not previously known what to do with. The recording of the song «10,000 lovers (in one)» included as many as seventy (70!) «Overdubs» of box guitar and a guitar solo with backwards effects. Now Ronni Le Tekrø comes to the National Library to talk about the song that just came on the record and became an international hit. The event is led by songwriter and producer Anne Lise Frøkedal, who is known as a solo artist and from bands such as I Was A King and Harrys Gym.
Presented by: The National Library, Norway 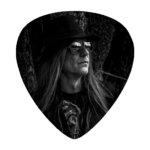 Ronni Le Tekrø has been a musician since he was born, and most of us know him best as one of the key founders, the leader and guitarist, of TNT.